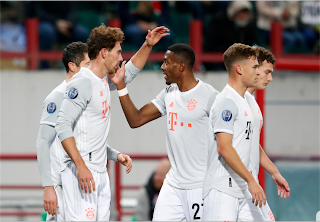 The Russian Lokomotiv Moscow team will host its German counterpart Bayern Munich today on 10/27-2020 at 08:55 pm today, Saudi Arabian local time, led by Istvan Kovacs, at the RZD Arena, in the matches of the two teams in the second round of the Group League of the Champions League From group A, the match will be held in the presence of a limited number of fans due to the Corona pandemic.

The starting line-up for Lokomotiv Moscow, under the leadership of coach Marco Nikolic:

The final whistle for Bayern Munich, Germany, achieved a difficult victory outside the home of Lokomotiv Moscow, Russia, with two goals to one goal, the two goals of the Bavarian giants, Leon Goretska and Joshua Kimmich, scored in the 13th and 79th minutes, while Anton Miranchuk scored Lokomotiv's only goal in the 70th minute.

The Bavarian victory strengthened Bayern Munich's top in Group A with 6 points, while Russia's Lokomotiv Moscow ranked second temporarily with one point.

The Russian team pressed in the first minutes, and almost visited Manuel Neuer with a header through Fedor Smolov, but it went easy in the hands of the Bayern goalkeeper.

Bayern almost surprised the hosts with an early goal, via Lewandowski's header, but the Polish striker failed to direct it accurately towards the net.

And after 13 minutes after the start of the match, the Bavarian managed to take the first goal after a wonderful technical sentence that Pavard ended with a direct pass to Goritska, who deposited the net with a header.

In a repeated goal scene, Pavard returned to send a cross pass on the bird to his compatriot Koeman, but the latter's shot hit the post.

Pavard tried his luck with a shot close to Lokomotiv's penalty area, but it went into the arms of Guilherme Marinato.

Daniel Kulikov penetrated the Bayern penalty area with individual effort, before he hit a ball, which Neuer touched and turned it into a corner, so that the guests maintained their progress until the end of the first half.

Similar to the start of the first half, Smolov threatened Neuer with a shot on the edge of the penalty area, which hit the players' feet before going into Neuer's hands.

Bayern continued to rely on his repeated sentence by sending a long pass to the one coming from the right side inside the penalty area, whether it was Pavard or substitute Gnabry.

Hernandez sent a pass like this to Gnabry, who met her with a one-touch pass to Kimmich, but the latter missed the opportunity to put the ball into the net after he failed to deal with it.

Lewandowski managed to get a penalty after being handicapped inside the area, but the video technology led the referee to retract his decision and cancel the kick.

Neuer saved his goal with a powerful shot directed by Ignatieff, before Gnabry wasted the opportunity for a verified goal with a great shot that passed by the left post.

As the Russian attempts continued, Komotiv equalized the result with a quick counterattack that ended with a pass by Louis' uniform to Miranchuk, who met her directly into the net.

The owners of the land launched a new counterattack that reached the uniform of Lewis, who started until he reached the penalty area, but his shot went past the left post.

Lokomotiv did not give up after being late again, but rather continued his dangerous attempts at the Bavarian team's goal, but the finishing of the attacks was not accurate enough.

In the last moments, Krychoviak fired a low-pitched ground shot towards Neuer, but it hit the feet of a Bayern defender and turned into a corner that did not result in anything, to make Bayern win 2-1.