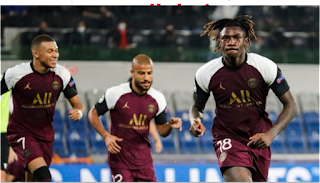 The Turkish Istanbul Basaksehir team hosted its French counterpart Paris Saint-Germain
today, 10/28/2020, at 8:55 pm today, Wednesday, Saudi Arabia, led by referee Andreas Ekberg, at Stein Emek Stadium, within the two teams' matches in the second round of the Group League of the Champions League Europe from Group H, the match will be held in the presence of a limited number of fans due to the Corona pandemic.

The French Paris Saint-Germain team succeeded in its European conditions, with a precious victory outside the Turkish champions Basaksehir Istanbul, with two goals without a response, today, Wednesday, in the second round of Group H of the Champions League by drawing the round.

Italian striker Moise Kean scored the two goals for his team to achieve Paris Germain's first victory, and compensate for his loss in the first round against Manchester United, while Turkish Basak is in last place without a win or draw.

The performance of the Parisian giant varied between very modest in the first half and relatively good in the second, while the Turkish team's danger was concentrated in paying from outside the penalty area.

The attempts of Mbappe, Di Maria and Florenzi were not enough, against Mert Junuk, the Turkish goalkeeper.

The calculations of Thomas Tuchel, the coach of Paris Saint-Germain, were also confused after Neymar da Silva was injured, and he had to replace him after he was replaced by Pablo Sarabia.

As for the Bosnian Eden Fiska, he was the only source of danger for Basaksehir, threatening the goal of Keylor Navas with more than one dangerous shot.

The Turkish team's players tended to be overly rough, prompting the referee to announce the yellow card for the trio Crivelli, Iboreanu and Mehmet Tobal.

But the Turkish team's resistance did not last long, as Mbappe and Di Maria missed two dangerous chances before Moise Kane nodded, taking advantage of a corner played by Kilian Mbappe.

Basaksehir coach Okan Buruk rushed to save the situation with two offensive substitutions, involving Hassan Ali Kaldirim and Demba Ba, but to no avail.

And the Parisian team continued to deal with strong attacks, and seemed to be affected physically, so Tochel moved two substitutions at once, involving Tilo Krier and Ravenia in place of Florenzi and Di Maria.

Confusion in the midst of the Turkish defense, Mbappe paved the ball for Moise Kane, to score the latter on his left, scoring the second goal for him and his team.

In the final minutes, substitutes Giliano and Alexic shared with Basak, while Idrissa Gaye and Mitchell Baker replaced Andir Herrera and Kurzawa.

Despite the collapse of the Turkish team, Vesca did not lose his enthusiasm or his danger, and goalkeeper Junok remained vigilant by addressing two chances from Mbappe and Ravinia Alcantara.