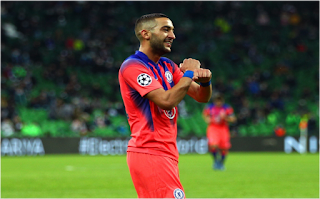 The Russian Krasnodar team will host its English counterpart, Chelsea, today, 10/28/2020, at 08:55 pm today, Saudi Arabian local time, led by referee Ali Playbek, at the Copan Stadium, within the two teams' matches in the second round of the group league in the Champions League competition from the group E, The match will be held in the presence of a limited number of fans, due to the Corona pandemic.

The starting line-up for the Russian club Krasnodar led by coach Murat Musayev:

The starting line-up for Chelsea, led by coach Frank Lampard:

Chelsea rose temporarily to the top with 4 points, pending the outcome of the Seville-Rennes match, and Krasnodar's balance stuck at one point.

Chelsea coach Frank Lampard relied on the 4-2-3-1 play style, as German Antonio Rudiger returned to the starting lineup, along with Curt Zuma in the depth of defense, with support from full-backs Cesar Azpilicueta and Ben Chilwell.

Jorginho and Matteo Kovacic took turns playing the role of the focal point in the midfield, while the trio Hakim Ziyech, Callum Hudson-Odoi and Kay Havertz exchanged roles in the front line, behind the outspoken striker Timo Werner.

On the other hand, Krasnodar resorted to a 4-2-3-1 play style, with the back line from the four-way line-up of Evgeny Chernov, Alexander Martinovic, Kayo and Igor Smolenkov.

Tony Vilhina was stationed with Daniel Utkin in the middle of the field, while the trio Christian Ramirez, Yuri Jazinsky and Krytoff Olsen tried to support the Swedish striker Marcus Berg.

Berg hit the first ball of the match, but it went over to Chelsea in the 3 minute, and a minute later, Blues goalkeeper Edward Mindy intervened to save Utkin's low shot.

Ziyech received a pass from Azpilicueta and the Moroccan shot, but goalkeeper Safonov removed the danger from his goal in the 9th minute.

The referee awarded a penalty for the guests after Werner was blocked, but Jorginho's shot hit the post and collided in the goalkeeper's back in the 14th minute.

Philhina cooperated with Berg before he hit a ball that bounced off the defense and passed by the goal in the 19th minute, and Jorginho stood in front of a new shot from Berg following a pass from Caio in the 25th minute.

Chelsea succeeded in opening the score in the 37th minute, after Odoi received a Havertz pass for an easy shot, but it passed strangely from under the goalkeeper and settled in the net.

The Krasnodar goalkeeper failed to control Azpilicuita's cross, reaching Havertz, whose header entered the goal before the line referee raised his flag, announcing the German's infiltration in the 43rd minute.

Chelsea opened the second half with a shot from Kovacic, slightly off the goal in the 49th minute.

Jazzynski's shot rebounded from the defense to the corner after a pass from Olson in the 54th minute.

The homeowner missed a dangerous chance to score in the 55th minute, when a ball from the defense rebounded to Jazinski, who shot a ball into the ground before hitting the crossbar.

Chelsea launched a counterattack in the 67th minute, and its danger decreased with Ziyash's easy shot, and the goalkeeper caught it.

And Chelsea made a triple switch, so Jorginho, Hudson-Odoi and Kovacic came out, and Ngolo Kante, Christian Pulisic and Mason Munt entered.

Chelsea's performance improved somewhat, to receive a second penalty kick after Pulisic hit a ball that rebounded from Martinovic's hand, this time Werner successfully executed the kick in the 76th minute.

Chelsea added a third goal in the 80th minute, with Hakim Ziyech's signature from Werner's pass, so the Moroccan wavered inside the penalty area, before paying in the crowd of defenders into the net.

Emerson Palmieri and Tammy Abraham entered the Chelsea squad in place of Chilwell and Ziyech, and Ramirez tried his luck with a crawling shot from the left, which Mendy easily controlled in the 85th minute.

In the last minute, Abraham slipped from the right side, before placing a neat ball in front of Pulisic, who fired it between the goalkeeper's feet to embrace the net with a fourth goal.