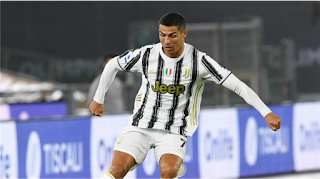 This comes in light of the lack of clarity about whether or not the Portuguese could participate in the match that will be held tomorrow, Wednesday, at ten o'clock in the evening Cairo time at the Allianz Stadium in Turin.

The Portuguese Football Association had announced that Ronaldo had been infected with the Corona virus in the last days of the camp in mid-October, and he underwent a 10-day medical isolation in order to try to catch up with the Barcelona match.

But the second result of the tests of the Corona virus for the Portuguese showed the positive of the sample days ago, which confirmed the difficulty of his catching up with the Barcelona match.

Ronaldo's absence from Juventus training this morning, Tuesday, indicates great doubts about his presence in the list of players who will play the match against Barcelona and his arch-rivals, Lionel Messi.