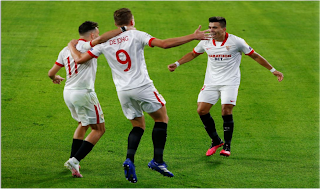 A Spanish team, Seville, will host its French counterpart, Rennes, today, 10/28/2020, at 11:00 pm today, Wednesday, Saudi Arabia, led by referee Konate Shaker, at the Ramon Sanchez Pizjuan stadium, within the two teams ’matches in the second round of the group tournament of the UEFA Champions League From Group E, the match will be played without the fans attending, due to the Corona pandemic.

The match ended with a hard victory for the Spanish club, Sevilla, at the expense of French stadium Rennes, 1-0.

The precious goal of the victory was scored by Dutch striker Luc de Jong, who scored the three-point goal in the 55th minute.

The Spanish team, Julen Lopetegui, won the first victory in the tournament, after a valuable goalless draw away from home in the opening round against Chelsea of ​​England.

The European League champion raised its score to 4 points, which the London team is in the lead with, with the "Blues" preference on goal difference after sweeping the Russian Krasnodar by four cleanly earlier today. While Rennes ranks third with one point after also drawing in the first round against the Russian team.