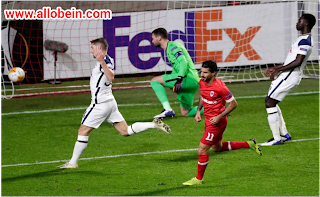 The Belgian Royal Antwerp team will host its counterpart, Tottenham Hotspur, today, 10/29/2020, at 08:55 pm today, Thursday, Saudi Arabian local time, led by referee Maurizio Mariani, at Buswell Stadium, within the two teams' matches in the second round of the first leg of the group tournament in the competition. The European League from Group J, the match will be held without the presence of the fans, due to the Corona pandemic.

The match ended with a sudden loss for Tottenham Hotspur against Royal Antwerp of Belgium, with a goal without response, the goal of the Belgian team, Lior Revailov, scored in the 29th minute.

With that result, Antwerp rose to the top of Group X with 6 points, while Tottenham's balance was frozen at 3 points, to decline to the rankings.

The first attempt in favor of Tottenham came in the sixth minute, with a shot from outside the penalty area, which passed through Bell, next to the post.

The Belgian team appeared in the match for the first time in the 14th minute, after Jerkins promoted a cross from a corner kick, and hit a header that went away from the goal.

Tottenham continued to rely on the shot weapon, and the attempt came this time from Burgoyne in the 19th minute, but the ball went weak in Boutiz's hand.

Antwerp tried to surprise the Spurs in the 22nd minute, after Rifailov received a cross ball from the right side, to hit a ball over the crossbar.

The Belgian team opened the scoring in the 29th minute, taking advantage of a big defensive mistake by Davis after the latter failed to clear the ball, to take Mbukani and go towards the penalty area, and pass the ball to the uncontrolled Rifailov who was alone with Lloris, and hit a missile that landed in the net.

Burgoyne tried to respond with a shot from outside the penalty area in the 32nd minute, but the ball went wide.

Tottenham continued, his average form, with a shot from Bale in the 40th minute that went away from the goal, to end the first half with the owners of the land leading with a clean goal.

With the start of the second half, Mourinho made 4 substitutions at once for Tottenham, with Vinicius, Dili, Berguin, and Lou Celso leaving, and Hueberg, Son and Lamila, in addition to Mora, leaving instead of them.

Antwerp missed an opportunity to score the second goal in the 54th minute, after Miyoshi sent an elaborate ground cross from the left side of the penalty area, and arrived at Mbokane, who found himself face to face with Lloris, to shoot strangely above the crossbar.

Immediately afterwards, Joclerod tried to surprise Lloris with a cross falling into the goal from the left side, but the French goalkeeper sent her away for a corner kick.

Mourinho did not wait long to make the fifth substitution in the 58th minute, when Kane descended at Bale's expense, looking for an equalization.

The Belgian team continued to miss the opportunities achieved, after Joclerod was alone from the midfield until he reached the boundaries of the penalty area in the 72nd minute, to shoot strangely above the bar.

Mourinho's changes did not present anything new, despite his pushing the basic elements, and did not pose any danger to the goal of Antwerp, and the last attempt of the Spurs came with a shot from Winx in the 89th minute, and went away from the goal, to end the meeting with the victory of the Belgian team with a clean goal.