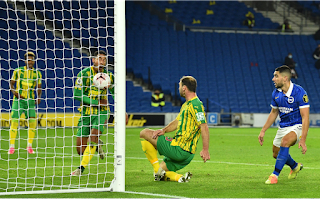 Brighton will host its English counterpart West Bromwich today on 10/26/2020 at 08:30 pm today, Monday, Saudi Arabia, led by referee Jonathan Moss, at Falmer Stadium, within the two teams' matches in the first leg of the English Premier League from the sixth week, the match will be held Without the presence of the masses, due to the Corona pandemic.

The match ended with a 1-1 draw between the two teams, so that each team collected one point.

Brighton took advantage of friendly fire and ended the first half in his favor with a goal by West Bromwich Albion's Jack Livermore, who had mistakenly scored in his own net in the 40th minute.

In the second half, Carlan Grant Lost Bromwich equalized with a goal in the 83rd minute.

Brighton raised its tally to 5 points in 16th, two points ahead of West Brom