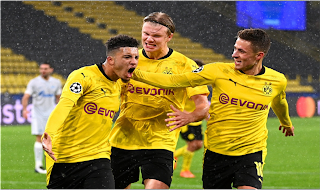 The German team, Borussia Dortmund, will host its Russian counterpart, Zenit Saint Petersburg, today, 10/28/2020, at 11:00 pm today, Saudi Arabian local time, led by referee Björn Kippers, at Signal Iduna Park, within the two teams ’matches in the second round of the first leg For the group tournament of the UEFA Champions League from Group F, the match will be held without the presence of fans due to the Corona pandemic.

Dortmund scored a double against the Russian team, English star Jadon Sancho, with a penalty kick, in the 78th minute, and the Norwegian star Erling Haaland added the second goal, in the first minute of stoppage time, through a penalty kick.

Lazio tops Group Six of the Champions League, with 4 points, with goal difference from Club Brugge, second-placed, which is equal with him in the number of points, then Dortmund, in third place, with 3 points, and finally Zenit, without points.