Barcelona claim a thrilling victory over Juventus in the Champions League 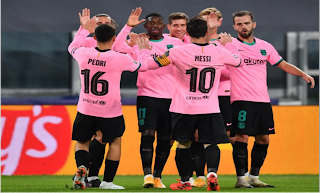 Barcelona managed to return from Turin with a dramatic victory over Juventus, with two unanswered goals, in the second round of the Champions League group stage.

Barca's victory came after a goal scored by French star Osman Dembele in the 14th minute of the match, after a shot that changed its course to deceive Juventus goalkeeper Chesney, before Lionel Messi scored the second goal from the penalty spot in the 89th minute after a race against Ansu Fati.

The meeting had witnessed a good level of stars from the two teams, and Griezmann almost scored a goal after a great organized attack, but his ball collided with the post.

In the second half, Barcelona was clearly superior on the pitch, and Messi's performance was distinguished, and he made several great passes and great skillful touches, and Griezmann almost added the second after a through pass from Messi, but his ball passed from the side of the post, and before the end Messi scored the second winning goal from a penalty kick After Bernardeschi blocked Ansu Fati.

The meeting witnessed the first participation of Miralem Pjanic and Artur in front of their former teams Juventus and Barcelona.

Barcelona raised its score of points to the sixth point, after two victories in the first two matches, while Juventus' balance was frozen at the third point, equal to Dynamo Kiev, who beat Ferencvarossi with two goals for a goal.