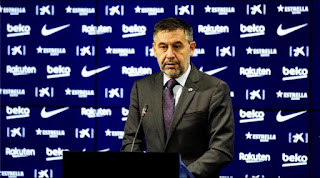 Barcelona president Josep Maria Bartomeu decided not to travel to Turin to attend the Blaugrana match against Juventus in the second round of the group stage.

Juventus will face Barcelona on Wednesday, in the second round of Group G of the Champions League 2020/2021.

The Spanish newspaper, Mundo Deportivo, confirmed that Bartomeu decided not to travel to Turin today, and he will also not attend the match tomorrow, because it is now related to some work within the club.

The newspaper indicated that Bartomeu wants to be aware of all that is happening inside Barcelona, ​​in light of the vote to withdraw confidence from him on 1 and 2 November, as well as the story of adjusting salaries for club workers.