-->
F
Home La Liga The results and events of the Real Madrid and Mallorca match, moment by moment in the Spanish League.

The results and events of the Real Madrid and Mallorca match, moment by moment in the Spanish League. 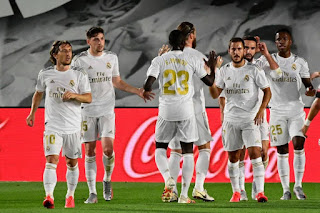 
Minute 5 goalkeeper "Rina" tackles the opportunity of a goal scored by Karim Benzema, who received a cross from Mindy over his chest inside the box and then shot in the left left corner, but Rina had a lookout.

Minute 10 Mohammed Baba hits a 30-yard ball from Real Madrid, and goalkeeper Courtois touches it with his fingertips to turn it into a corner.

The 11th minute is a fiery and fast start to the match.

The 12th minute, Mallorca holds and exchanges balls at the beginning of the match ... confirms that it will not be an easy catch today, as it was against Alersa in the return of the season after the Corona pandemic.

Minute 19 Goowl ... The first goal for Real Madrid by Vinceios Junior with a beautiful shot from inside the penalty area after a cross pass from Modric.

The 20th minute, the referee reviews VAR technology to ensure the goal is correct due to objections from Real Mallorca players.

The 20th minute, a replay, shows Real Mallorca player Danny Rodriguez being pushed by Carbajal while leading a counterattack, and the referee did not count it as a mistake against Carbajal.

The 23rd minute, Vinceius wastes the second goal with astonishment !! He explicitly alone with the goalkeeper after receiving a pass from Karim Benzema in the defensive depth.

23rd minute, Vinceius preferred to lift the ball over the head of the goalkeeper, Reina, the moment he advanced from his goal, to hit the ball in the crossbar .. he could put it on the right or left corner..the goal was completely open .. Vinceius reviewed .. as usual!

The 34th minute, Real Madrid takes possession of the ball from foot to foot, but without danger, it is the goal of Reina

The 38th minute of Mallorca returns at the meeting and puts pressure on the club's defense again.

42nd minute Mallorca goalkeeper Reina scatters a free kick with a fist. The referee blows for a foul against Ramos.

45 minutes we play in the last minute of the first half .. and the referee adds 3 minutes as a time instead of wasted
45 + 3

The end of the first half, the real ahead of Mallorca 1-0.

46 minutes, can Real Mallorca modify the result and hinder the progress of the Royal Club?

The 47th minute indirect free kick for Real Mallorca is carried out at the head of one of the defenders applying for the offensive role, to turn it in the middle of the goal to catch Courtois, Sergio Ramos scores the second goal in the Real Mallorca goal with an amazing curved shot in the way of Beckham !!

The 56th minute of Ramos's shot from 25 yards, went curved over the human wall, and inhabited the left scissors of the guard who tried on it in vain..Rena was shocked by the way the ball rotated!

60 minutes Budemir hits a powerful ball from outside the penalty area, but she is in the middle of the goal, catching Courtois easily!

The 61st minute has three changes at once for Real Mallorca's coach, "James, Kochu and Sevia", instead of Valkinet, Bodemir and Vipas.

62nd minute Real Madrid coach Zidane Benzoul's first change to Tony Crosse instead of Edin Hazard, a modest performer in the second half.

The 70th minute is a fourth change for Real Mallorca to Salibor instead of Junior.

The 71st minute is a double change for Real Madrid by Ascencio and Isco going instead of Luca Murdic and Gareth Bale.

The 72nd minute of play calmed down a lot in the second half, especially after Ramos scored the second goal, which completely killed Mallorca's spirits.
80 minutes yellow card for Real Madrid's full-back Verlan Mendi.

The 83rd minute is a double change for Real Madrid by Mariano and Brahim Diaz coming in instead of Vinceios Junior and Karim Benzema.

The 84th minute is a final change for Real Mallorca to go down Romero instead of Mohamed Baba.

The 87th minute is yellow card for Tony Cross.

The referee adds 4 minutes as a lost time.

The 91st minute Real Madrid calms the game and tries to add a third goal in the last minutes.

93rd minute, the third goal was lost to Mariano Diaz after he failed to expect a cross pass from Danny Carbajal.

Real Madrid continues the dream of winning the Liga title for three years.