The results and events of the Manchester United and Sheffield United match in the English Premier League matches. 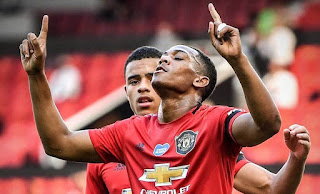 
7 minutes, Goole, Manchester United's first goal .. Anthony Marcial gives the Red Devils precedence, Rushford sends a quick cross cross from the right side, preceding Sheffield defender Marcial to the nearby corner and kicks it wide in the net.

The 8th minute Sheffield defense shows that it is completely fragile, unlike before the layoff.

15 minutes United are still ahead with a clean goal.

Minute 20 Sheffield is now trying to get out of his way to threaten United.

The 25th minute of Manchester United's organized and coherent defense forces the Sheffield players from a long shot.

33 minutes, the first corner of the game in favor of Sheffield, but passes safely on United's defenses.

The 37th minute, play is confined to the middle of the field in these moments ... and there is no serious attack yet after Marcial's goal.

Minute 43 Goooooooo, Anthony Marcial scores the second goal for United, and Pescaka plays with Sheffield's defender on the right side and sends a wonderful cross cross into the six yard area that finds Marcial who shot straight into the goal.

The 44th minute is an extraordinary brilliance of the French international, Marcial, the first-half champion.

The match rule adds 3 minutes as a stoppage time.

The 45th + 1 minute Bruno Fernandez plays with Sheffield's defense and passes a ball to Greenwood ... he kicks it, but it is weak in the hands of goalkeeper Moore.

The 45th + 3 minute whistle at the end of the first half with a deserved progress by United with two clean goals.

The minute 49, Wan Pisaka is a very dangerous cross, before arriving on top of McBurney.

The 54th minute shot from Greenwood was on its way to Sheffield's goalkeeper, bouncing his colleague Marcial's foot into a goalpost.

The 60th minute Manchester United is now out of his way and trying to threaten Sheffield.

The 67th minute yellow card over Luke Shaw after a strong intervention on the Sheffield player.

The 74th minute Jules hat-trick for Marcial and the third for United in a more than wonderful way.

The 80th minute Manchester United is making 5 substitutions at once in these moments.

The 83rd minute, Igalo pushes into Sheffield's defenses from the left side and tries to shoot the ball, but goalkeeper Moore closes the corner to bring the ball to the corner.

The 88th minute, Igalo tries to dribble the goalkeeper, but the latter pulls the ball away, turning the Nigerian striker again and kicking it in, but Moore puts it off to head into a corner kick.

The 90th minute + 3 the final whistle

Manchester United achieves a victory that is close to the journey to qualify for the Champions League.
Premier League