The results and details of the Manchester City and Burnley match, moment by moment, in the English Premier League matches. 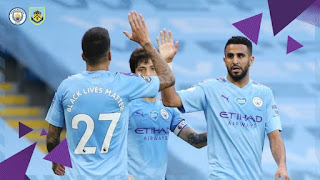 Our appointment today is with the Manchester City and Burnley club match in the English Premier League matches on 22-06-2020, where the match will take place at Al-Ittihad Stadium exactly at 10:00 pm Saudi Arabia time led by referee Andre Mariner and the match will be held behind closed doors without a public presence .

Minute 5 Manchester City is not the best party at the start of the match, Burnley is pushing hard in the middle of the field and building an attack now.

The 15th minute long-range shot from Spain's "Rodrí" passes too far over the bar
The 17th minute, the most dangerous opportunity in the match, David Silva dedicates a ball on a silver plate to the Portuguese player Bernardo Silva inside the penalty area, Bernardo received it with the left foot and then shot his right from the movement position to deviate slightly near the left post, he had to leave the ball to Riyadh Mahrez who was in a suitable position To behave better.

In the 24th minute, Fudin fired a left missile shot from outside the penalty area after receiving a pass from Bernardo Silva, to go to the far left of goalkeeper Bob who tried it unsuccessfully.

The 30th minute Manchester City dominates the match with length and width, always focusing on Riyadh Mahrez from the right side ... doing a great job of swapping balls with the Silva duo.

35th minute Riad Mehrez gives a beautiful ball to Aguero on the 18th line from the far right to the far left, but Aguero's shot shot into a defender and came out.

Minute 37 All engagements, interventions and attempts on the one hand, Riyadh Mahrez, there is no thinking from Manchester City players or even Burnley to play on the other side.

Minute 39, Riad Mehrez kicks off and passes before the incursion into the penalty area and passes to David Silva and then to Fuden, who paved in front of the Senchenko coming from behind to pay off the strength of 30 yards went in the hand of the goalkeeper easy.

42nd minute Riad Mehrez received a long pass from Fernandinho, a little after midfield, to run with the ball and dodge two Burnley defenders and hit the right of the goalkeeper ... a very beautiful goal from the Algerian star.

48th minute, Sergio Aguero goes out due to an ankle injury after a strong "Mai" interference with him in the penalty game.

48th minute, Brazilian Gabriel Jesus, a penalty miss specialist, takes Aguero's place in the City squad now as the first change in the match.
The end of the first half.

The 50th minute Manchester City is continuing with possession and seems to want to score a fourth goal.

60th minute, a first change for Burnley club to enter "Peters" instead of Jay Rodriguez.

The 61st minute, a double change in Manchester City, led by Kevin de Bruyne and La Porte instead of "Riyad Mahrez and Fernandinho".

62 minutes gool. A fifth goal for Manchester City from a typical counterattack, after 4 or 5 assists, ended with a perfect boot from Gabriel Jesus within the penalty area to Fuden who struck with one touch with the left foot on the right of the goalkeeper.

The 62nd minute, Manchester City Cancelo's full back is under warning.

The 68-minute minute is a time-out for some water.

Minute 75, Sani is warming up and preparing for his first post in about 9 months, after recovering from a cruciate ligament injury.

In the 80th minute, a plane appeared during this match bearing the phrase "life of eggs is important, Burnley"! It is racist against black people.

The 88th minute was the second change for Burnley to take Thomson instead of Vedra.

end of the match
Premier League