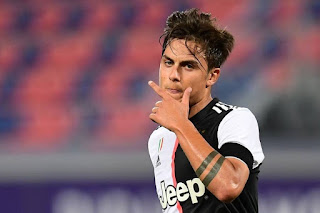 Our date today is with the match between Bologna and Juventus in the Italian league matches on 22-06-2020, where the match will take place at Renato Dal Ara stadium at 10:45 pm Saudi Arabia time led by referee Gianluca Rocky and the match will be held behind closed doors without Mass attendance.

Minute 6 Ronaldo penetrates into the defenses of Bologna from the left and launches a powerful shot that Skorobsky brilliantly saves.

The 11th minute, Adrian Rapio sends a cross from the left, bumping into the foot of the Bologna defender and bouncing in the hands of his teammate inside the penalty area, but Rocky demands a resumption of play amid objections from Juventus players.

Minute 16 Ronaldo gets a free kick directly at the outskirts of the Bologna penalty area, he takes it in by himself, but his shot came out of the cross.

18 minutes Cristiano plays today on the left side and leaves the depth to Paulo Dybala, while the right side is occupied by Bernardeschi.

The 20 minute play now stops due to Rabio's injury after he joined a volley ball with the defender of Bologna, and Roque counts a mistake on the French midfielder.

The 21st minute penalty kick for Juventus, Rocky uses the mouse and makes sure that there is a clear tension from the defender of Bologna on De Licht during the implementation of the Juventus corner, Jowowol first goal for the Juventus .. Ronaldo takes the penalty and pays it in the middle of the goal successfully.

27 minutes, more than 10 consecutive short passes for Juventus players and in the end they lose the ball! Passive incomprehensible passes.

30th minute Rocky is red-carded for Sari's assistant due to his frequent protests.

Minute 31 We know that FIFA allowed the referee to declare the red card in the face of the coach or one of his assistants during the course of the match, starting in the current season, previously the expulsion was only oral.

The 34th minute is a yellow card for Bologna Soriano after a clear reverse error on Bianic.

35 minutes, Jowool Dybala scores Juventus' second goal with a powerful shot from outside the penalty area, Bernardeschi plays a ball with the heels with a slight rotation of Paulo Dybala deep in the defenses of Bologna on the borders of the penalty area, the Argentine tames him on his left and launches an unavoidable shot to hit the Scorobsky net.

The 37th minute is a dangerous opportunity for Bologna .. A powerful shot from Sanson from outside the penalty area is saved by Ceseny and taken off the corner.

beginning of the second half

50th minute No serious attacks yet.

52nd minute Bernardsky tames a ball on the right and shoots a missile from outside the penalty area, which bounces from the left post of Ronaldo and shoots it directly into the goal, but the goalkeeper tackles, hey .. Before that, the referee announced an infiltration of the Portuguese.

The 54th minute hit a direct free kick by Juventus in the face of the goal .. Pjanic will be executed by it and shot but bounced off the wall.

55 minutes Dybala hits a powerful ball from outside the penalty area, but passes past the left post.

The 61st minute Ronaldo appears with a high spirit in a defensive shot and turns the ball away against the back of Bologna with a wonderful tackling.

The 65th minute DiCielo is injured in these moments without any fusion .. it appears to be a muscle injury.

The 66th minute, a yellow card on Di Cello due to his exit from the pitch and his return again from wasting some time.

The 68th minute is a yellow card for the Juventus player Pantancor after a strong intervention on the Bologna player.

The 70th minute two swaps for Juventus with the exit of Rabio and Matuidi's descent, Pjanic's exit and Ramsey's descent.

The 72nd minute, a powerful shot by Ronaldo from outside the penalty area, goes a few centimeters apart from the right post.

The 75th minute, a second substitution in Bologna's ranks ... the exit of Roberto Soriano and the departure of Nicholas Dominguez.

The 78th minute is a fourth substitution for Juventus, with Dybala exiting and Douglas Costa coming out.

The 82nd minute 3 substitutions for Bologna by sending me in and going down, Sansoni and Kangiano, and Chilean Gary Medel and Andrea Poli going out.

The 86th minute of the match is on its way to the end, and Al-Juofi are still ahead with two goals to none, amid several attempts by Bologna to score an honorary goal.

The 89th minute is a canceled goal for Juventus ... Ronaldo receives the Costa ball and pays in the goal, but before that the referee announced an offside.

The 90th minute + 1 red card for the Juve player "Danilo" after receiving the second yellow card after a strong intervention on Bologna striker Musa Baru.

Minute 90 + 4 direct free kick in favor of Bologna in the face of the goal ... Moses Baro hits but bounces off the wall.

Minute 90 + 7, a wrong exit from Chesney almost cost Juventus the first goal, but Bonucci saves the situation and turns the ball away.

The end of the game, Juventus scored a valuable victory over Bologna with two clean goals.
Italian League