The formation and outcome of the Leicester City F.C and Brighton match in the Premier League matches. 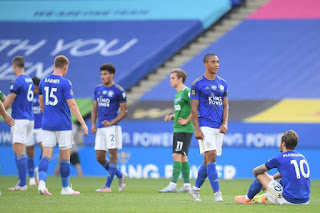 Our appointment today is with the Leicester City and Brighton club match in the English Premier League matches on 23-06-2020, where the match will take place at Walkers Stadium exactly at 08:00 pm Saudi Arabia time led by referee Lee Mason and the match will be held behind closed doors without a public presence .

Leicester City fell into the trap of a 0-0 draw with Brighton at the opening match of the 31st round of the Premier League competition.

The Leicester City players failed to take advantage of the many opportunities they had throughout the meeting, in which the Brighton team managed to impose a tie result from the start.

And Leicester moved away in its struggle for second place with Manchester City with this tie.

To increase Leicester's balance at 55 points in third place behind Manchester City by 8 points, and Brighton raised its score at 33 points in fifteenth place.
Premier League