-->
F
Home La Liga Details and events of the Barcelona vs Athletic Bilbao match, moment by moment, in the Spanish League

Details and events of the Barcelona vs Athletic Bilbao match, moment by moment, in the Spanish League 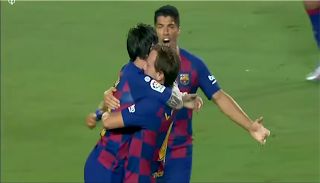 Today will be held with the Barcelona and Athletic Bilbao match in the Spanish League matches on 06/26-2020, where the match will take place at the Camp Nou Stadium at 11:00 pm Saudi Arabia time led by the referee Jesus horses Manzano and the match will be held behind closed doors without Mass attendance.

Minute 1 start of the meeting

Minute 3 Ter Stegen saves the Barcelona goal from a certain goal by clearing a cross from Unai Nunez that he sent from the left side with the right foot in the Six Yard area.

Minute 5 is a missed opportunity from Barcelona .. Because of Suarez misuse of Messi's cross inside the six yards, the ball bounces on the borders of the penalty area from the defenders of Bilbao, to be paid from Vidal and hit in the body of cannons and come out corner.
Minute 10 The first 10 minutes of the match have passed, and the game is limited to the center after the fiery start of the football war between Catalonia and Basque Country.

The 12th minute Balenziaga takes a 25-yard ball from the left post.

13 minutes, Bilbao is the best party to the ball.

The 23rd minute Bilbao offers an excellent match so far, with dribbling and an exchange of balls from foot to foot against the Barca penalty area.

The 24th minute Gerard Pique is undergoing comedy dribbling inside the penalty area (Ingo Likoy) who, after skillfully disposing of Pique, passed the width of the penalty area from the left, but an abuse by Inaki Williams missed an opportunity with a certain goal.

The 27th minute singles from Inaki Williams, but he shoves the ball strangely into the net from the Ter Stegen goal, which knocked out his goal in perfect timing and closed the narrow angle of shot.

The 28th minute Barca replies ... a shot by Simedo ... bad bad, crawling away from the left post.

The 30th minute is a time-consuming break for players to drink some water.

32nd minute the game is back ... and a yellow card by Barcelona player Sergio Busquets.

The 35th minute of Bilbao's brilliant and deep defense today, closed all crossing points on Suarez, Griezmann and Messi ... and there are no solutions from the middle to help the front trio.

40 minutes Barcelona is trying to calm down the game for fear of a surprising goal!

43rd minute is a very bad shot by Messi ... he hit it curved in the left foot from about 23 yards away, I went in the stands!

The 45th minute Barcelona acquires without any risk the goal ... Bilbao is satisfied with what he did during the first 30 minutes.

45th minute, the referee blows the first-half whistle, with a 0-0 tie.

The 45th minute whistle at the start of the second half

The 47th minute has no replacements at the start of the half ... the two teams have the same elements

The 54th minute, Messi dedicates a golden ball to Griezmann inside the penalty area, and the French receives the chest and pays in the body of goalkeeper Simon the moment he leaves his goal ... what a sure opportunity.

56th minute The beginning of the changes ... Arthur's exit and Bouygues' departure in the Barcelona squad.

The 64th minute, a new change for Barcelona with the return of Anso Fati instead of the disappointing Antoine Griezmann

The 64th minute, a change in Barcelona midfield by Ivan Rakitic, instead of Busquets, hoping to improve supplies to the offensive

The 72nd minute Messi paces a beautiful ball inside the penalty area towards Rakitic, after a stunning drawing of the ball, so Rakitic is uniquely shot and hit a powerful right to the right of the goalkeeper ... a precious and valuable goal!

Minute 74 Messi passes a cross ball to Suarez inside the penalty area, after a beautiful dribble on the borders of the region, and Suarez receives a perfect and dribbles the first and second and pays to hit the body of one of the players and turn a corner.

The minute 76 time-out to drink some water.

The 78th minute is the fifth and last change for Athletic Bilbao Benzoul Raul Garcia instead of Sanket.

The 83rd minute mistake by Terje Steigen nearly cost Barca the equalizer ... after a wrong goal coming out!

85th minute, the fourth change for Barcelona to enter "Braithwaite" instead of Luis Suarez.

The 89th minute was a powerful shot by Lionel Messi, on the 18th line, after a perfect boot from Anso Fati to turn a corner.


The 92nd minute, a sure-missed opportunity to score from Barcelona.

The 92nd minute cross by Rawdi from Jordi Alba after receiving a pass from Vidal on the far right corridor, to reach his cross later to Vidal inside the penalty area, and with a one-touch shot in the narrow corner goalkeeper Simon brilliantly saves, to return the ball to Anso Fati, who followed him with a shot more powerful than necessary In the left post from inside the six yards !!

The 93rd minute Messi dodges everyone on the edge of the penalty area ... and gets a direct free kick, executed by himself in the human wall.

The 94th minute, the referee blows the final whistle.
The match ends with Barcelona winning to regain La Liga lead, 3 points behind Real Madrid, who will face Real Mallorca tomorrow for the same round.
La Liga